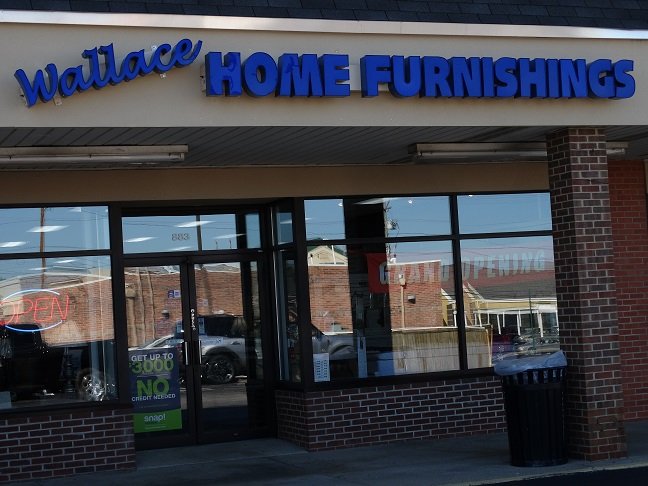 (between Sweet Mango and Hop Hing)

While Richard Wallace, owner of Wallace Home Furnishings, has heard a lot during his long career in the furniture business, he really wasn't prepared for the call he got one day.

The very distraught woman on the other end of the call was convinced the bedroom set she had purchased from  Wallace was haunted. She wanted to know if Rick would pay for an exorcist to come in and remove the ghost.

When questioned, the woman said that during the night, the drawer to the nightstand would suddenly glide open. She was, understandably so, rather upset.

Intrigued, Rick knew there had to be more to the story, and he was fairly certain there was no ghost attached to the furniture.

Rick asked if he could visit and examine the furniture. The woman explained that it only happened in the wee hours of the morning, so that is when he dropped by.

So, he sat down to wait for the ghost to make its move.

Meanwhile, the woman was busy explaining to her husband why Rick was there. The husband, being hard of hearing, tended to be loud himself and also did not realize he would slam doors closed.

And that was when it happened.

Rick knew instantly what was happening and who the ghost was.

It turned out that very early every morning, the husband would get up and upon returning to his room, slam the door. The vibrations caused by the door slam caused a tremor through the wall to where the nightstand sat, up against the wall, and because the drawer slides were so smooth working, the tremor caused the drawer to glide effortlessly open.

At first, the couple didn’t believe that was all it was until Rick demonstrated. Relief all around, and the call to the exorcist was cancelled.

As Rick moved the nightstand out from the wall, the woman explained that she and her husband had asked the delivery men to set the furniture pieces as close to the wall as possible, even though the delivery crew had explained that it was standard procedure for furniture to be installed with some space between it and the wall.

What is truly great about this true story is that it demonstrates just how far Rick Wallace will go to make a customer happy. It also is a great demonstration of how smooth moving the nightstand drawer is!

Rick cares very much about taking good care of his customers and delivering quality products to them. He encourages people to note the SKU number on a piece of furniture they find elsewhere and bring it to the him to compare the price.

He also firmly believes in the value of community and has donated to several local causes.

Enter the beautiful showroom at 883 N. Court Street in Medina and you will be warmly welcomed into Rick's dream of having his own furniture store.

Rick does not believe in hard-sell sales pitches, but instead offers an easygoing, friendly approach. He tailors his suggestions to the specific needs and budgets of each individual customer. If there is something you need in a line he carries, but you don’t spot it on his sales floor, he is happy to order it for you.

Having been in furniture sales for many years prior to opening Wallace Home Furnishings, Rick is able to leverage his solid contacts with furniture manufacturers to obtain pieces and many times sell them for less than half the price of what other furniture stores are able to offer the exact same pieces at (check the SKU numbers to verify before you buy!).

Visit Wallace Home Furnishings at 883 N. Court Street, Medina (in the same plaza as Starbucks/Chipotle) and enjoy the beautiful artwork and incredibly comfortable, beautiful furniture. Be sure to tell them Joy of Medina County Magazine sent you!